Dr. Enrique R. Carlos established the Makati Dog and Cat Hospital in 1962 with postal address of Amapola, Bel-Air III with telephone no, 88-63-86 and 87-28-60 now 5426 Gen. Luna cor. Algier St. Poblacion, Makati City; while the address has changed the physical location is the same. He maintained the Dog and Cat Hospital in 839 Romualdez St. Ermita, Manila with telephone no, 3-22- 60. He took over the hospital from his father Sixto Almeda Carlos in 1959.

Dr. Enrique R. Carlos was born on April 24, 1921 and was baptized Jose Antonio Vicente Enrique Almeda Carlos y Rodriguez. He graduated from the University of the Philippine College of Veterinary Science located in the Bureau of Animal Industry (AI) compound in Pandacan, Manila, now the Malacanang Security compound in 1972. Since the Nagtahan Bridge was not yet existing students ands personel of the Bureau of Animal Industry would ride a banca to cross the Pasig River and for those with car would be picked up at the other side to San Miguel and Malacanang.

In 1972, he was appointed to the College if Medicine, University of the Philippines as part-time professor without
compensation in the Department of Medicine. He was also appointed as Visiting Scientist of the NAMRU II (Navy and Marine Research Unit) of the US Navy doing extensive research on Leptospirosis and other pathogens. He was also a Consultant of the research facilities of the Veterans Memorial Hospital. 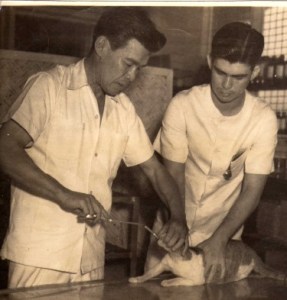 Pet Shelters during Disasters and Emergencies